The continued rise in bitcoin prices is often both a blessing and a curse. The gospel is because it can inspire people to participate in the bitcoin network. The curse is that people will inevitably pay too much attention to its indicators, especially when “prices rise and fall”. It simplifies complex financial ecosystems into a bubble economy. In this economy, speculation seems to be the most important use case.

However, this paper is not to compare digital assets with traditional assets according to the growth stage of assets. This article aims to illustrate the data we often ignore when discussing bitcoin. Nakamoto wrote in 2010 that WikiLeaks poked a hornet’s nest when integrating bitcoin. He may not have foreseen the real role of bitcoin. Over the past decade, bitcoin has given inflation plagued economies an alternative, allowing authoritarian economies to transfer wealth and conduct fruitful experiments in the field of financial technology.

Long before the advent of defi, loans, remittances and trading tools were based on bitcoin. In the past ten years, Nakamoto’s achievements tell me that code can also inspire a revolution. These ideas can provide individuals with different choices. Even if the entity you face is a superpower with military bases all over the world, the nuclear arsenal may make the gods tremble. When we indulge in paying attention to the price of bitcoin, we all ignore the paradigm that existed before bitcoin. We also ignore the fact that in this era of increasingly digital cash, authoritarian regimes use increasingly complex mechanisms to find, distinguish and target dissidents, while bitcoin provides another option. Whether they use it as a value storage means or payment mechanism depends on them, but for me, this is Nakamoto’s lifelong achievement.

This paper uses ten different charts to introduce the development of bitcoin in the past decade. In order to make this article more concise and clear, I divide the article into three parts:

Mining ecosystem – observe how bitcoin computing power surges over time, how miners dominate and the returns they receive. In the past decade, the average effective recipient address has increased by 40.676%.

Since 2017, the average number of new addresses has been 124 million. 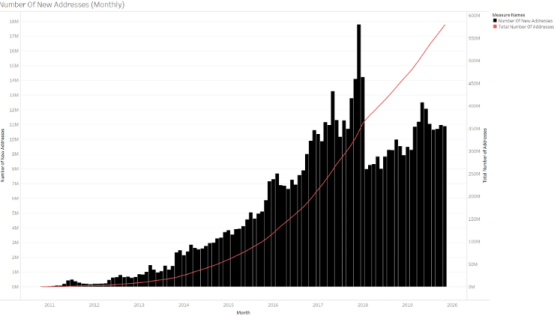 The new address is a measure of ecosystem expansion. Discarding created accounts will increase the error of edge contribution. In 2019, the bitcoin blockchain added an average of 358000 addresses a day, much higher than 7100 in 2011. From these data, we can also observe an interesting point. Among the 1 million independent addresses using bitcoin blockchain on December 14, 2019, more than 800000 are new addresses. Facts have proved that new retail investors probably reached the peak at that time. This conclusion cannot be reached without studying the wallet holding mode at that time. By studying the average number of addresses holding more than 0, 1, 10 to 10000 bitcoins, it is obvious that holding is very common in the ecosystem. However, this indicator only focuses on the number of addresses, so it is also possible for individuals to transfer tokens from one address to another, or allocate their tokens to multiple different wallets. However, if we look at the number of addresses holding more than 10000 bitcoins, we will find that it is still growing steadily at a rate of 100%. Inactive accounts peaked on December 17, with more than 28 million accounts holding more than 0 bitcoin. By April 1, this figure had dropped to 21 million, which makes people wonder whether it is multiple addresses owned by the same person (in many parts of the world, March 31 is the end of the financial year). As of December 5, more than 28 million addresses held more than 0 bitcoin. As of January 2011, only about 34 wallets had processed more than 10000 bitcoins. By December 2019, this figure will hover around 130. By December 2019, users with more than 10 bitcoins will soar from 51000 to 152000. This shows that although the number of early adopters and “whales” has increased, it is still retail investors who drive the growth of bitcoin demand.

The most important information I get from studying these figures is that in all holding user statistics, regardless of the price, the address count of each segment is at ath. According to the negative media news in this field, fewer and fewer people throw money, and more and more people test the water with small money. In terms of scale, only 70000 people held more than 0 bitcoins in January 2011. Today, this figure has exceeded 28 million, an increase of 400 times over the past decade. 487 million transactions have been confirmed

The transfer value is more than $7.5 trillion It doesn’t make much sense to discuss the number of transactions but not the total amount of transactions. Therefore, I will show the total amount of bitcoin transactions in US dollars and bitcoin respectively. In this way, it can be seen that the rise in bitcoin price may mean that “whales” sold a large number of tokens to the market that day, resulting in a large amount of total transactions. In addition, looking at this figure, it is clear (as expected) that the rise in the price of digital assets has changed the way individuals transfer bitcoin. Since the birth of bitcoin network, a total of $7.5 trillion has been transferred, of which about $870 billion has been transferred within one month. I don’t know much about the data of December 2017, but this month seems to be very important (I also want to know the reason). I also found an interesting phenomenon. The total amount of bitcoin reached a peak (331 million) in September 2012 and was 17 million by November 2019. With the rise of bitcoin price, users seem to be more inclined to hold more bitcoins, and the number of bitcoins used for trading is very small.

Note: every move of bitcoin is counted as one time. Since the same coin can be transferred back and forth many times, this number will be much higher than the supply.

Fees paid up to $1 billion Since the fourth quarter of 2013, the computing power of bitcoin has increased 1000 times.

It took 37 months to reach its first Th / S (from January 2009 to March 2011). In the next 37 months, this figure has risen to 495624th / s. As of December 2019, the average mining computing power dedicated to bitcoin was 95 million Th / s. Part of the reason is that it was only amateurs who were mining at first, but later it evolved into large-scale data center based mining operations. Access to short-term credit, government subsidies, electricity and other key factors can determine the winners of mining today.

In short, it may be helpful to calculate the funds invested in mining and how much money can be invested in mining. In terms of th / s, I think the best is bitfury’s Tardis, which costs $3770 (80 MH / s). If the costs of labor, power, logistics and data center leasing are included, the Th / s invested in bitcoin network is about $47.125. However, the figure may be much higher than this, because bitfury Tardis was released at the end of 2018, and the unit economy of early miners may be worse. At about 95 million Th / s, the low-end market should be US $47125 * 95 million = US $4475 million.

This number may be higher or lower, depending on

The key is that the low-end market has invested at least $5 billion in bitcoin infrastructure alone. Accounting for 3.65% of the total market value. This investment seems to be “inefficient” in the traditional situation, because the system administrator will open and close the database at will, but this is the price that the ecosystem has to pay for decentralized management.

Note: Moore’s law stipulates that the dollar cost per Th / s will be gradually reduced. I have calculated the best price for th / s. Based on the models available at that time, we will tend to consider the annual dollar cost of the best th / s, plus the estimated time it may have run, to plot the rent and labor costs around the world. However, this “decentralization” is also accompanied by the risk of “cartel (multiple companies jointly control prices and restrict competition)” and unification. In 2014, a mine pool gathered 42% of bitcoin computing power and almost launched 51% attacks. At that time, a “bitcoin developer” named vitalik buterin (called V God) suggested establishing a gold reward pool to encourage the development of P2P mining pools. That was five years ago. People may say that there are more and more economic incentives, and equity holders don’t want to try similar things again. Since January 2009, the mine has awarded $16 billion to miners committed to the network. What I found interesting is that the launch of btc.com (2018) and huocoin mining pool (2019) soon attracted people’s attention and joined the mining ecosystem one after another. Hardware manufacturers such as bitfury have also found that it is very simple to bring the ore pool to market over time. The percentage of “unknown” pools in the network has also gradually decreased.

Who paid $16 billion to the miners Including transaction costs, miners have received 18318525 bitcoins (or more than $16 billion). In view of 18076100 bitcoins in circulation in December 2019, we can safely say that about 242525.09 bitcoins have been used to pay transaction fees in the past decade. I think mining will become more and more institutionalized with the increase of mining difficulty and the approach of halving. We will see more emerging Unicorn companies from convenient mining (retail), ASIC development, manufacturing and supply chain (such as Xiaomi’s contribution to mobile phones) and infrastructure service providers focusing on green energy. As bitcoin’s mining operations in the region significantly promote the ability of the region’s economy, we may also see a gradual increase in government subsidies for real estate and energy. What does all this mean (to me)?

I have always regarded bitcoin as the most important financial experiment in the world. It is based on 40 years of progress in cryptography and the value of decades of digital currency experiments. When many people look at today’s ecosystem, they may see grandstanding people, speculative fanaticism and possibly chaotic culture on twitter. They ignore the fact that these are carefully designed because bitcoin cannot compete with the existing paradigm in the field of financial technology. Otherwise, Nakamoto would choose to sell to venture capital companies in Silicon Valley instead of writing emails to password punks. This is a necessary condition if bitcoin is to become a real substitute. When we have a “real identity” or “headquarters”, these systems may be destroyed. Bitcoin is not only a hot spot we see on twitter, but also not just media hype. It’s unusual code.

Look at the country where the currency can be abolished in a few hours to see why we need alternatives. Like all technologies, regulators need to realize that elves have escaped from their pockets. They can push it to the edge, slander it, and criminalize the act of holding it. But they can’t tame it yet. We can see this phenomenon when people turn to bitcoin when the RMB depreciates, Zimbabwe has an inflation crisis, Greece has a debt crisis or India begins to scrap money. The point is that people are beginning to realize that there is another alternative. As NIC Carter once said, “bitcoin is the most peaceful revolution in human history.” for me, this is the charm of bitcoin. These indicators simply show how the bitcoin ecosystem has grown significantly. Whether these trends will remain unchanged in the next decade or whether the price of bitcoin will soar to $100000 is not a matter of concern (to me). As long as the transaction is confirmed, bitcoin has solved its own problems.

Finally, let’s take a look at the transcripts of bitcoin in the past ten years.

Since the data of December was incomplete when I started writing this article, the figure shows the data of November.
Responsible editor; zl