In the previous article, I discussed the issue of HDMI cable radiation due to shielded pigtails (reference 1). It is also shown graphically in the video in reference 2 why shielding the pigtails of a cable causes radiation emissions.

In addition to the problem of shielding pigtails, the quality of shielding braid of coaxial cable varies from tight to loose according to the cost. Cheap cables may have very loose braids, which can cause signals to leak in and out of the cable. This can lead to consistency failures and measurement contamination from external sources during troubleshooting operations. High quality “mil standard” cables usually have two braided shielding layers, so they are very suitable for emission testing.

My colleague, Steven Sandler of picotest, and I explored the shielding characteristics of coaxial cables. He demonstrated a unique method by connecting one end to the input of a spectrum analyzer and setting the span to cover the 2.4 GHz ISM (Wi Fi / BT) band. Assuming that there are Wi Fi access points and computers nearby and scanning in maximum hold mode, it is easy to identify shielded cables with poor quality by observing the increasing received signal level. A well shielded cable will show a relatively small signal (Figure 1). Another important feature is the low DC resistance between the shields of each connector. Measuring the DC resistance can also roughly check the conductivity of the shielding layer and the welding condition between the shielding layer and the connector, and the operation is simple. Just set the DC power supply to the current limiting value of 1a, and then connect the output to each end of the tested cable (Fig. 2). The output voltage may drop to a lower value, but it doesn’t matter, as long as the power supply is designed for constant current operation.

According to Ohm’s law, using digital multimeter (DMM) to measure the voltage drop (MV) from one end to the other end of the cable is the DC resistance in M Ω. A low DC resistance measurement is particularly important for accurate PDN impedance measurements (reference 3).

I have several cables to characterize, including some standard BNC jumpers and some high quality double shielded rg-316 cables. I am also curious about the performance of beehive’s near-field probe cable, because I will widely use it in the routine troubleshooting process.

As the center pin at the end of the free male connector may pick up the stray RF signal, you can choose to use a short-circuit connector or a 50 Ω terminal for termination just in case. However, I found that the free end of the termination cable did not change the display result, so I did not care about it.

For the standard spectrum analyzer, the starting frequency and ending frequency can be set to 2.4GHz and 2.5GHz respectively, the resolution bandwidth can be set to 100kHz, and the attenuation and reference level can be adjusted to get effective display. Technically speaking, the cable with excellent shielding performance will show little response, while the cable with poor shielding performance will clearly show that there is Bluetooth signal near the Wi Fi channel.

Double click each channel mark to open it, then set the vertical direction to 1mV / grid, and set the input to 50 Ω. Then open the “spectrum view” panel and open the analyzer to check the normal value, maximum holding value and average value. This provides a baseline of approximately zero, stores the maximum signal, and displays the actual measurements for each channel. You can set the horizontal direction to 40ns / lattice, but this is not critical (Figure 3). For more information about this oscilloscope, see reference 4. Figure 3: when using Tektronix 6 series oscilloscope with spectrumview for cable shielding test, the cables should be separated and vertical to the ground.

Then double click the spectrum analyzer panel to set the span to 100MHz and the center frequency to 2.45GHz. Set the resolution bandwidth to 100kHz, and leave the rest as the default. At the beginning of the measurement, I chose to grasp the center line between the spectrum display and the time domain display, then pull it down and let the four spectrum displays become the dominant. Keep the maximum measurement value stable for a few minutes to display the maximum envelope, so that Bluetooth and Wi Fi channels can be clearly displayed.

Cable to be tested

I have a variety of coaxial cables that I want to test – some old HP universal BNC jumpers, a cheap BNC jumper without a tag, some rg-316 dual shielded SMA cables (purchased from the seller through Amazon), a beehive SMA to SMB cable (I’ve used several for general troubleshooting), and picotest’s custom high quality triple shielded PDN measurement cable.

Before testing, we may want to connect a cheap cable to understand the expected results when adjusting the display results. Connect cables 1 to 4 to get the results shown in Figure 4. The picotest is tested separately (Figure 5). Figure 5: Although the vertical range here is different from the others, the picotest PDN cable has the same measurement results as beehive cable.

1. Hpbnc jumper – this cable may be 30 years old, but in the typical HP style, its shielding performance is very good.

2. Black BNC jumper – this kind of cable doesn’t work well at all and may lead to radiated emission failure, let alone measurement coupling problems. The measured signal level of the cable is 50dB higher than that of other cables.

3. Amazon bought rg-316 cable – the performance of this cable is not up to my expectations, and I’m not sure if it uses double shielding like most rg-316 cables.

4. Beehive probe cable – this is one of the best, but not as good as HP cable. This surprised me because it didn’t seem to use double shielding. In the end, however, it receives relatively few signals.

5. Picotest PDN cable – as expected, this triple shielded cable is a better cable.

Another characteristic test suggested by Sandler is to simply connect each end of the cable shield to a constant 1A power supply (Figure 6). The m Ω value can be obtained directly by measuring the voltage drop with a digital multimeter. The maximum reading of a good cable should be less than 10 to 15 m Ω. In this way, the shielding layer itself and the welding condition between the shielding layer and the connector can be checked at the same time. As shown in the figure, make sure to measure the DC voltage drop on the coaxial cable connector, so as to ignore the voltage drop between the two connecting test lines. 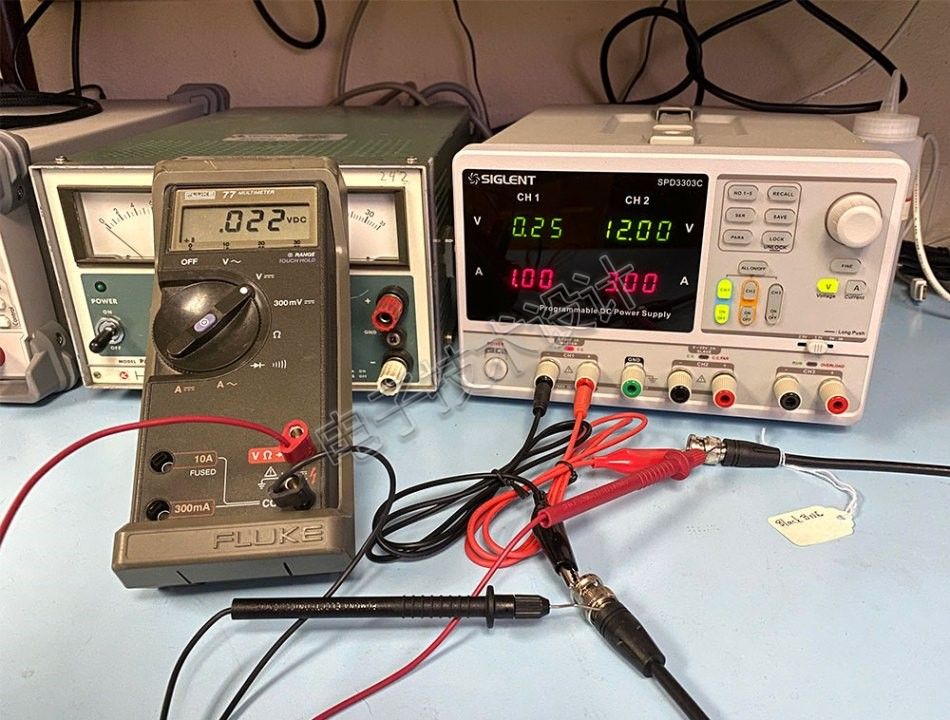 Figure 6: by setting the power supply to 1a constant current, the DC resistance can be read directly from DMM, which is 22m Ω in this example. Table 1: DC resistance measurement results of each cable under test.

The DC resistance measurement results of black BNC jumper and Amazon rg-316 cable are very poor and suspicious, indicating that the conductivity of shielding layer is very poor and / or the welding between shielding layer and connector is not good. The HP cable measures slightly better than the picotest cable, which is surprising considering that it is already very old. Both beehive’s and picotest’s cables gave excellent results.

I was curious why the black BNC jumper received so many signals compared to other test cables, so I dissected one end (Figures 7 and 8).

Figure 7: dissecting the “black” BNC jumper shows that it is soldering a short shielded pigtail to the ground plane of the BNC connector.

Figure 8: the close-up shows that the braid of the cable shield is very loose, and the coverage seems to be less than 40%.

Obviously, the shielding quality of black BNC cable is so poor. Although the cable does have a shielded pigtail connection, it is very short. To make matters worse, the shielding braid is too loose, which can expose the intermediate conductor over the entire length of the cable. I estimate that the coverage rate is less than 40%, which is very poor. 90% to 98% coverage is very good. I will never use this cable for conformance testing.

It may have a high risk to test the radiated emission consistency of cables with poor shielding quality, which usually leads to emission failure. Simple shielding test and DC shielding resistance test using common Wi Fi and Bluetooth signal sources can quickly check the shielding quality and connector welding of the proposed test cable.

I’m glad to find the inferior BNC jumper, and I’m glad to see the excellent performance of beehive probe cable, HP and picotest cable. The shielding performance of the cable purchased by Amazon is not as good as that of HP, beehive or picotest, and its DC resistance also indicates that the shielding layer and connector are poorly welded.

Kenneth Wyatt is the president and chief consultant of Wyatt technical services.