At the beginning of the film Terminator: dark destiny, there was a humble foreshadowing:

When the heroine’s brother went to work, he found that his job had been replaced by robots. His sister angrily went to the supervisor theory and got a response of “this is the future”.

Similar to the plot that human beings are threatened or even backfired by the continuous development of artificial intelligence, there are endless stories in literary works. It is recognized that the replacement of repetitive jobs by robots is also a predictable consequence after the high development of automation.

A few years ago, you might feel that such a thing is far from yourself. After all, the cost of using robots on a large scale is not cheaper than labor, and the completion of some operations is not satisfactory. Until recently, the news about the failure of automation still confirms people’s judgment: Japanese robot hotels “fire” half of robots because of low efficiency; Excessive automation of Tesla plant leads to slow ramp up of model 3 capacity; The closure of Adidas’s robot factory is also speculated to be costly and unable to produce on a large scale.

It seems that automation just looks beautiful. It’s too early for robots to kill artificial labor, but is this really the case?

In the kitchen of a corner building in Pasadena, the robot flipy grabs the frying basket full of chicken bars and immerses it in hot oil. After the temperature is confirmed by the sensor, the frying basket is lifted, drained and poured into the leaky spoon.

Not far away, another flippy watched the beef pie hissing in the frying pan. It transmitted the image to the machine vision system of the brain through the eye camera. After the beef had the correct Brown shadow, he scooped out the beef with a shovel like manipulator and put it on the hamburger, and then put the hamburger on the tray.

Flippy is a robot built by miso robotics for enterprise kitchens. It specializes in dangerous, cumbersome and time-oriented cooking, such as flipping hamburgers, fried chicken and cutting vegetables. In other words, it is the lowest paid job in restaurants.

Note that the above scenario took place in 2016. Miso robotics has a clear purpose to make robots work like humans on the fast food production line, and the cost is lower than the minimum wage.

At first, the price of flippy is not cheap. One needs $100000. However, due to the rapid reduction of hardware cost, its price has been reduced to less than $10000 in 2020, and cheaper and more space-saving models will appear soon.

This is not over yet. In order to further impress restaurant owners, miso robotics also launched a subscription system. At $2000 a month, it can hire a robot to help in the back kitchen, which is equivalent to about $3 per hour. For the same job, if real-life employees are employed, they need to pay US $4000 to 10000 per month according to the business hours of the restaurant and the minimum wage in different regions. Besides, robots never have to take sick leave. As long as you like, they can take 24 hours × 7-hour operation.

At present, flippy has been put into use in Dodge stadium and fast-food chain caliburger. Maybe Americans will soon be able to eat hamburgers made by robots in various fast-food restaurants. Maybe the price of food will be cheaper after the labor cost is reduced.

Flippy is expected to solve the long-standing shortage of staff in the catering industry. Consumers’ demand for fast food is growing, but lower wages lead to a high turnover rate in the restaurant industry, exceeding 100% per year (United States).

Just as early computers often occupied the whole room to store data, in most cases, even if robots can complete their work, their working environment needs to be greatly modified, not plug and play, let alone work safely with humans. Therefore, since the emergence of the first robot, Robots are often too expensive to be used on a large scale in industry.

Now the motor, engine and sensor technology have been improved, and the cost has been greatly reduced. Robots such as flippy are cheap and reliable, and can work in a normal environment, which has caused people’s anxiety and even panic.

Not only the restaurant staff, the invasion of automation on jobs is all-round, and it comes faster than expected. 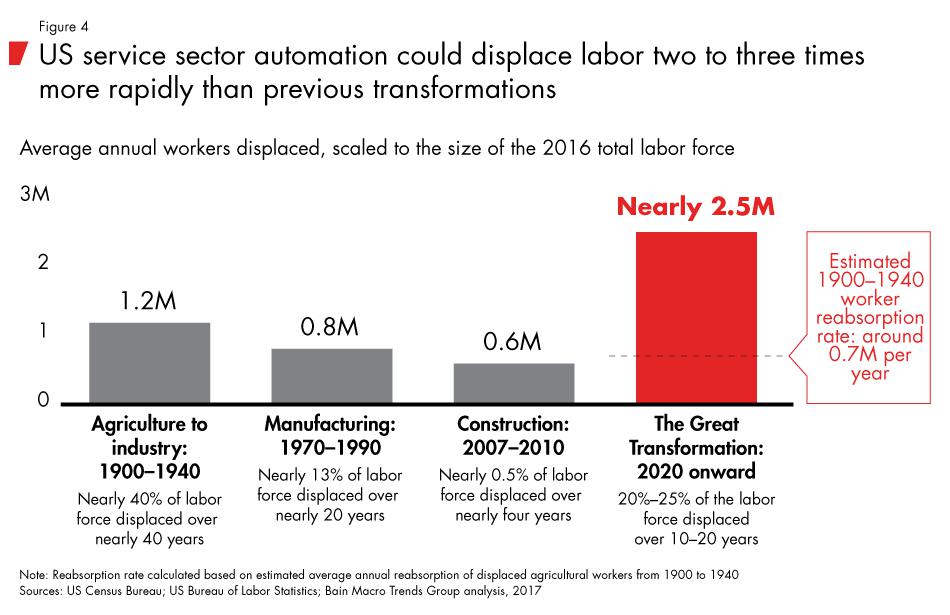 The report labor 2030 released by Bain consulting in 2018 has attracted much attention because it discusses the impact of automation on the social environment. The report predicts that by 2030, the popularization of automation will reduce the current jobs by 20% – 25%, that is, 40 million jobs will be replaced by machines, which is only in the United States.

What’s worse, even for employees who keep their jobs, the salary growth will be much slower. For example, the cost of restaurants using automatic ordering machines and online ordering systems may be lower than that of specially hiring waiters. Therefore, if the salary of waiters remains below this level, there is no need to worry about employment problems, but the salary increase will become extremely limited. JL Warren capital’s report also pointed out that Tesla’s Shanghai plant is less automated than its California plant because the labor cost in Shanghai is lower than that of the fully automated industry.

Bain’s analysis shows that in the next few decades, about 80% of workers may be affected by stagnant wage growth or unemployment, and flipy’s example has told us that the cost of automation will only be lower and lower.

The outbreak of novel coronavirus pneumonia has also made many industries that rely on human resources to see or rethink the necessity of automation. Robots can not only reduce labor costs and increase production efficiency, but also be fearless in front of viruses. In the environment of advocating “non-contact”, we can also see the application of robots in food delivery, disinfection, body temperature and other scenes.

Machine replacement is the general trend

Of course, automation does not bring all the bad news to employment. Robots eliminate old jobs, but new technologies also mean new employment opportunities. Just as computers not only make typists withdraw from the historical stage, but also create new occupations such as software developers and computer technicians, the popularization of automation is bound to rapidly expand the demand for machine maintenance personnel, Behind the rapid development of AI industry, the team of “data taggers” is also growing.

Some scholars take personal computers as an example and point out that automation may not lead to the extinction of a certain profession. “When spreadsheet software first appeared, everyone was predicting that bookkeeping and accounting would be over,” said Ken Goldberg, an engineering professor at the University of California, Berkeley. “In fact, it changed the work, so accountants didn’t spend a whole day adding numbers to calculators, but began data visualization and planning.”

However, from an individual perspective, it is not easy to find a way out under the wave of automation. Whether it is a new type of work or optimizing efficiency, the technical threshold is obviously getting higher and higher. The waiter is robbed by the ordering machine. How many can be transformed into machine maintenance personnel? After the factory is equipped with a fully automatic assembly line, how many workers have the ability to repair machines?

Moreover, this round of automation not only threatens manual workers, but also low-tech grass-roots white-collar workers are facing the fate of being eliminated. To borrow a phrase widely quoted recently, “a grain of ash of the times, falling on an individual’s head, is a mountain.”

Fortunately, it is a gradual process for low skilled labor to be replaced by machines. There is always a chance to transfer to other labor-intensive fields. If the restaurant job is gone, you can also deliver takeout and express delivery, so that everyone will not lose their jobs overnight.

The occupation of the labor market by automation technology is not a phenomenon only after the emergence of AI. The agricultural automation in the United States from 1900 to 1940 made millions of farmers unemployed, which is regarded as one of the causes of the great depression. The commercial dishwashers appeared during that period, which threatened to eliminate the whole kitchen work.

Now, under the double impact of the epidemic and the sharp decline in oil prices, US stocks have recorded the highest one-day decline after 1987 and 1929. The stock markets of many European countries have fallen into a technical bear market, and the shadow of economic recession has enveloped the world. While expanding productivity, high-tech represented by the Internet and artificial intelligence are also considered to have widened the gap between the rich and the poor.

History seems to have entered a new cycle, but compared with the last century, the pace of technological change is obviously faster and faster, leaving less and less time for people to adapt.